Many animals have legs, however, there are quite a few species and types of animals that don’t have any legs at all. Today, I will cover how 10 of the most common types of animals and specific animal species move without legs.

Animals with no legs are called limbless. Meaning they have no limbs at all. Underwater, they move by swimming, and on land, they move their body in a somewhat ‘swimming’ motion to move. Examples are:

To start with here’s a really helpful table that shows a short summary of the main ways each animal with no legs moves:

Below, is a more in-depth explanation of how these animals without legs move, and why they move in the way they do.

Seals spend some of their time on land but are most mobile in the water. On land, they move about like a caterpillar, where they bunch up their body and then extend it. They can also use their flippers to help push them along the sand, rocks, and ice.

In the water, they are very agile and use their feet like fish. To a lesser extent, their front flippers propel themselves forward.

They also have very flexible bodies that allow them to change direction very fast. This is useful for avoiding predators and also for catching prey such as fish and crabs.

Almost all fish have no legs. Instead, they have a single tail with a fin. Their front flippers can be used to propel them forward. They mostly use them for:

Fish primarily get around by moving their body and tail from side to side. By coordinating these two movements, they can generate incredible speed.

There are some rare fish that have fins that look quite similar to legs. However, they are different enough that they could be called legs. They use these to ‘walk’ around on the ocean floor. Some also can walk on muddy and sandy areas that are there when it’s low tide.

Examples of rare fish with leg-like fins are:

There are many different-sized snakes, from huge anacondas to smaller cobras and rattlesnakes. If you’ve observed a snake and a lizard, you will notice they look very similar as they move in some ways. However, snakes also move in very different ways from lizards.

Interestingly, there are four primary ways that snakes move. These are:

In appearance, it looks like they’re floating on the ground. However, they are making small, very coordinated, fast movements that can’t be seen.

This movement is the same as the serpentine movement. However, they bunch up a small part of their body at a time, and very fast. They also do it in multiple parts of their body all at once.

The next type of movement is the accordion movement. According to biologists, snakes move in this way by holding the front of their body still and pulling up the rear of their body so that their body is all bunched together.

They will then press their tail into the ground and hold it still while they extend the front of their body.

FUN FACT: Snakes commonly use this method to strike at prey from a distance. But also when they are resting and begin moving again.

Sidewinder movement is where a snake holds the front and tail of the body in place at the same time. They then move the middle of their body to one side.

After that, they hold the middle of their body in place, lift their head and tail off the ground, and move them to one side. Making their body into a ‘C’ shape or sideways ‘V’ shape.

They then repeat this process by holding their head and the end of their body in the same place.

Finally, snakes will move in a rectilinear movement pattern. This is where a snake keeps its body straight and alternates moving its belly muscles on either side to move forward.

Snakes are so good at this method that they appear to be moving forward without any effort at all. Snakes use this method when they are very relaxed and can only move quite slowly when moving in this way.

If a snake is moving in this way and gets startled or needs to move away quickly, it will switch to one of the other methods of moving because it’s faster.

Here’s a quick video that shows this type of movement:

There are also some species of snakes that can swim very well and live in and out of the water.

Whales are a type of animal that includes the largest animal in the world – the Blue Whale. There are many different sizes of whales, but all whales are herd animals and swim around in packs.

Whales get around with their large and strong tail. Because of the size of their tale, they don’t need to move it up and down a lot. They can even propel themselves so fast that they can jump out of the water.

Killer whales have been known to propel themselves onto beaches to catch seals that are on the beach. Unfortunately, they risk getting stuck if no waves come for a while to help them shimmy out of the sand and into the deeper water where they can swim normally.

Whales spend all of their time in the water. Therefore, they don’t need legs to get around. Some species of whales hunt seals, whereas others are filter feeders, such as baleen whales.

Shellfish are animals that spend all of their time inside a shell. Shellfish can live in the deep ocean but also close to the coastline. Underwater the shell of shellfish protects them from being eaten by anything and everything. Only specialized animals like starfish and octopuses can pry them open.

Shellfish either live in the sand or are attached to rocks. In the sand, they will tend to bury themselves to stay in place. Some shellfish dig very deep into the sand to avoid getting found by predators.

They eat by taking in a small amount of water into their shells and then filtering out nutrients. Some shellfish will use their tongue for swimming if they are traveling to a new destination. Whereas others will open and close their shell to swim – like scallops.

Check out how scallops move in the video below:

Shellfish will push out eggs into the water column, which are then fertilized by sperm. A baby shellfish starts off by having a soft body where it will quickly grow a hardened exterior that gets thicker, bigger, and stronger over time.

Shellfish that can’t swim are moved about by ocean currents, where they will settle onto a suitable area like a rock. From there, they will take hold and, with a bit of luck, grow a shell that is attached or stuck to the rock before very strong currents wash them away.

Dolphins are known by scientists to be some of the smartest animals on the planet. There are many different species of dolphins. However, they all swim and feed in much the same way. Dolphins have an almost identical tail that whales have – which is horizontal, unlike fish which normally have a vertical tail that moves side to side.

They also have a very muscular tail that allows them to stop and start moving very quickly. Dolphins primarily feed on fish. They are pack animals and will work together to make it easiest to catch fish.

Dolphins spend their entire life in the water. However, they also breathe air. They can hold their breath for about 8 to 10 minutes before they need to return to the surface. As you may know, dolphins have a blowhole at the top of their head that they use to breathe.

Dolphins can easily swim upside down and on their side and are very agile. Because dolphins are a lot lighter than whales, they can jump high up in the air and they also often have fun catching waves.

Walrus are unusual creatures that primarily live on ice and in very cold water. They can stay warm in these conditions because they have a large layer of fat under their skin. Walrus also have two very large teeth. In appearance, they look like tusks.

In the water, they move the back of their body side to side, up and down, and in any direction, depending on how they need to move their body to get to where they’re going.

Walrus are very good at swimming. They have a lot of short whiskers on the front of the mouth. They primarily feed on shellfish and mollusks that are partially buried on the ocean floor. They put their mouth into the sand and feel around for shellfish using their whiskers.

Many jellyfish hardly move at all. Jellyfish come in all different colors, shapes, and sizes. Jellyfish move about by pumping their body to propel themselves.

Most jellyfish just ride along currents. Some jellyfish have bodies that are filled with air and will float on the surface of the water. Jellyfish primarily eat by trapping small fish or tiny animals in their tentacles.

Eels are very similar to snakes except that they live in water. There are a few different types of eels. Some live only in freshwater. Whereas others live in the ocean, such as Moray eels. They primarily live in burrows or crevices in rocks where they can hide and avoid other larger fish and sharks that want to eat them.

Interestingly, freshwater eels have no natural predators. Eels, unlike whales and dolphins, have an up-and-down tail. They move their body side to side to propel themselves forward. Freshwater eels can also survive out of water for a very long time.

Eels are carnivores and eat:

Most eel species sleep during the day and hunt at night. Freshwater eels are not very good at swimming on land.

They will move their body side to side and move very slowly. However, they will do this to move between rivers or in shallow water to catch prey.

Freshwater eels are similar to salmon. They will feed until they grow to a certain size. Then they will lay eggs and die naturally.

Manatees are very unusual creatures. They are nicknamed the sea cow. Manatees spend all of their life in the water but need to return to the surface every few minutes to breathe air. Manatees grow incredibly large, up to 3,500 pounds (1500 kgs).

Manatees eat plants on the river and sea floor. They spend a good chunk of their day eating. They get around with small flippers near the front of their body and their tail that is:

Manatees can swim as fast as 20 miles an hour (32 km/h) over short distances. However, most of the time, they swim at a very slow walking pace.

Manatees typically swim so slowly most of the time that algae grows on their skin. Small fish clean their skin by eating the:

Manatees don’t have any natural predators. The areas of water where they live don’t have sharks or crocodiles that would normally eat them.

A very similar animal to a manatee is a dugong. They are virtually identical. The only difference is the dugong’s tail is a slightly different shape. Rather than being round like a circle, it’s a crescent shape similar to what dolphins and whales have. 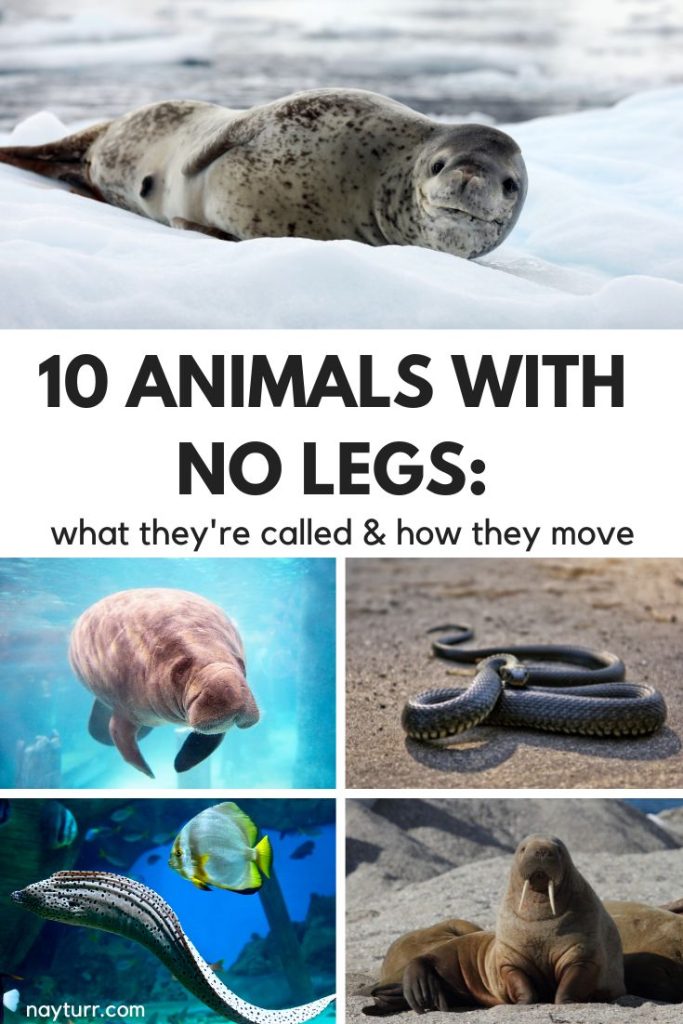