The world of Maine Coon Cats is a colorful one. Their incredibly fluffy fur comes in many different colors, patterns, and combinations. If you’re poised to buy a Maine Coon cat and wondering what options you have, then you’ve come to the right place.

Here we’ll discuss what color Maine Coon cats are and all their colors and combinations. I once found myself in the same position before I got my Maine Coon kitten and learning about the various colors was a fun way to get to know the little guy.

Maine Coons can come in various colors, such as:

These colors can be combined with different patterns, such as:

All in all, they can come in as many as 80 different color combinations.

If you want to learn more about the various colors and patterns of Maine Coon cats, then keep reading!

How Can You Tell if Your Cat Is a Maine Coon?

Before we get into the colors of Maine Coon cats, you might be interested in first learning how to tell if your cat is a Maine Coon. Here are six main traits to look out for:

As each individual cat is unique, these traits can vary in how prominent they are. However, they’re still a good way to tell if your cat is a Maine Coon! If your cat is a mixed breed, you might observe three to four of these traits, but not all of them.

White Maine Coons are pure, snowy white with pinkish noses and ears. A solid white Maine Coon is actually rather difficult to breed. The white color isn’t a gene that can be passed on to the next generation, so breeders have to be very selective with how they breed.

NOTE: Across different cat breeds, pure white cats only make up 5% of the population due to the difficulty of breeding.

Cream Maine Coons are similar to white Maine Coons, with just the slightest tinge of color. They’re also sometimes called beige or tan, as the color is similar.

Maine Coons that are black from head to toe will typically have black noses. Even when their fur appears solid black at a glance, some Maine Coons can have a smoke pattern — a grayish undercoat that’s only apparent if you look closer.

Brown Maine Coons are a warmer shade than black. They’re one of the easiest colors to find as the color is easy to breed. The most favored combination is a smoky brown Maine Coon with a white undercoat.

Red or orange Maine Coons have an incredibly bright color. This is one of the most well-known colors, along with its combinations:

The vibrant color tends to stand out even when combined with others.

Interestingly, 90% of red Maine Coons are male, due to the way the color is passed down. The red color will always be found in an X chromosome.

NOTE: As females have two X chromosomes, another color might combine with red. Males only have a single X chromosome and a Y chromosome that doesn’t give color, so the strong red color can easily manifest.

A “blue” Maine Coon isn’t actually blue — it’s simply a shade of gray that has a bluish tint. Many pet owners like blue Maine Coons in solid colors, but the color can also be found in combinations with white or a smoky undercoat.

Aside from the colors themselves, the patterns of Maine Coons play a big part in how an individual cat will look. Here are the main patterns you’ll see described when shopping for Maine Coons:

Solid Maine Coons are easy to identify at a glance — they’re a single color from head to tail, with no stripes or patches. To tell if they’re truly a solid Maine Coon, you’ll have to look closely at their fur.

If a strand is a single color from root to tip with no other bands of color (e.g. silver or black, in the case of smoke or shaded patterns), then it’s a solid Maine Coon.

NOTE: Some Maine Coon owners might assume that they have a solid-colored cat, only to realize that they’re actually shaded or smoky.

Tabby Maine Coons are one of the most common — and popular — patterns. It manifests in a range of swirls, stripes, and spots, making for a visually striking coat. An interesting feature of tabby Maine Coons is the “M” marking that you can see on their forehead.

As tabbies can come in a wide variety of markings, the Cat Fanciers Association divides them into three groups:

Smoke Maine Coons are similar to solid Maine Coons at first glance. However, the important difference is that their undercoat is a silvery color. Sometimes, their chest fur will also be lighter. If you look at a single strand of hair, you’ll notice that it’s silver on the shaft.

NOTE: Smoke-colored Maine Coons are difficult to identify when they’re kittens, but it’ll be easier to tell when they grow up and the undercoat becomes more prominent.

Bi-color Maine Coons have one color combined with white patches. They’ll typically have white patches over their stomach, chest, and the underside of their face. Some will also have white forelegs or hind legs.

Tortoiseshell Maine Coons, also known as “torties,” have a black base coat with splotches of cream and red.

Tortoiseshell tabbies, also known as “torbies” or patched tabbies, have a similar color palette but with stripes instead of splotches.

Maine Coons come in a wide range of combinations. If you’re in the market for a new cat, feel free to shop around — there are over 80 ways to mix and match the colors and patterns, so you’ll doubtlessly find a unique Maine Coon to call your own.

Related: “When Does a Maine Coon Kitten Become an Adult Cat“ 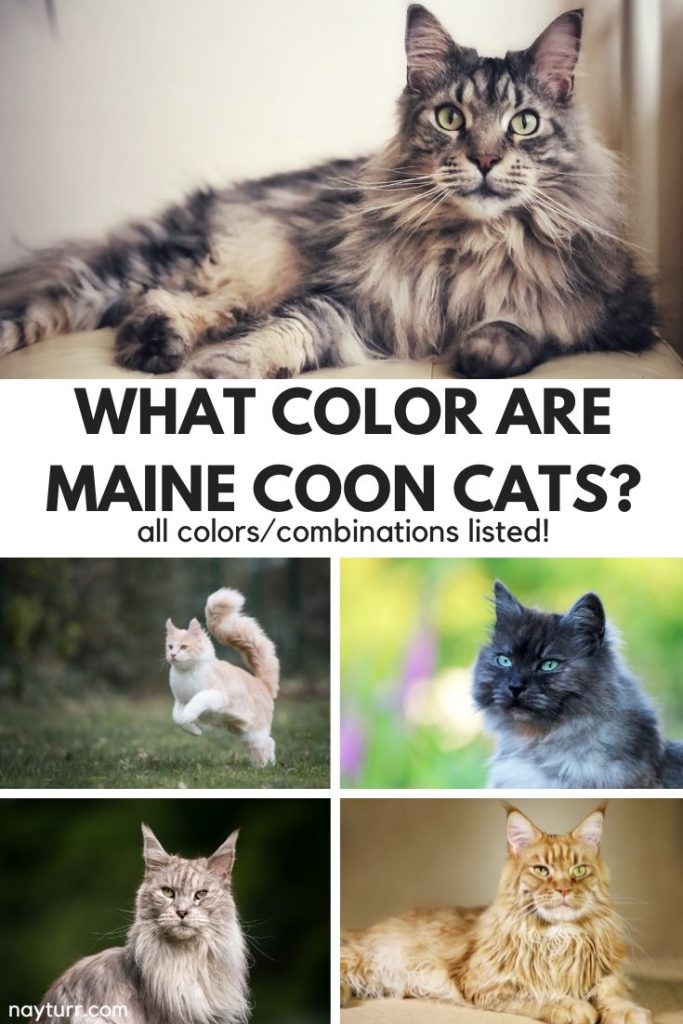