Synovial joints are the most common and most mobile joints in mammals. Their freely moveable characteristic means they enable mammals to make large movements and they also provide stability in the body.

Learn more about these movable joints to fully appreciate them.

Condyloid joints have an irregular surface at the point where the bones move past one another. In essence, the joint is very similar to the two bowls nested together. A good example of a condyloid joint is the radio-carpal joint in the wrist.

Gliding joints allow you to get a smooth movement in many different directions along a smooth surface such as a plane. It is similar to two plates sliding across one another. The carpal bones of the wrist are an excellent example of a gliding synovial joint.

Much as the name implies, hinge synovial joints are those joints that form between two bones. These joints allow for stable extension and flexion without any deviation or sliding movement. A good example of a hinge joint is the elbow joint that lies between the ulna and the humerus.

With a pivot joint, the action is more rotational in nature and provides movement without any type of gliding. The pivot joint allows for motions without displacement sideways and without bending. An example of a pivot joint is the joint between the first and second cervical vertebrae or the atlas-axis joint. This one allows for the most range of motion in the head while still allowing the head on the neck to remain stable.

Saddle joints have two bones that fit together similar to a rider in a saddle. They allow for a bending motion in many different directions without any sliding. An example of a saddle synovial joint is the carpal-metacarpal joint in the thumb.

Glossary of Terms Related to the Different Synovial Joints

This is the point where the clavicle joins with the acromion.

This joint is between the leg and the foot.

This is a type of gliding joint.

A type of synovial joint. Here, the spheroidal or rounded surface of one bone (the ball) moves within a depression that is cup-shaped (the socket) on another bone. This allows for great freedom of movement as compared to other types of joints. The ball-and-socket joint is also called the spheroidal or poly-axial joint.

The bicondylar joint is a condylar joint that has a meniscus between the articular surfaces; an example would be the temporomandibular joint.

This is a type of synarthrosis whereby the bones are united by cartilage, providing only a little flexible movement. There are two types of cartilaginous joints: the symphysis and the synchondrosis.

This is a compound joint and a type of synovial joint in which more than two bones are involved.

Also known as a condyloid joint, this joint is one where an ovoid head of one bone moves in an elliptical cavity of another. In turn, this permits all movements except axial rotation. It is found at the wrist where the radius and carpal bones connect, as well as at the base of the index finger.

This is a type of synovial joint.

This is a synovial joint located between the ulna, radius, and humerus.

This is a type of condylar joint.

These are the articulations of the vertebral column.

The fibrous joint is a joint in which the union of bony elements is by continuous intervening fibrous tissue. This makes little motion possible. Also called the synarthrodial or immovable joint or the synarthrosis, there are three types of fibrous joints: the suture, the gomphosis, and the syndesmosis.

A flail joint is unusually mobile and results when joint resection is completed in order to relieve pain.

This is a synovial joint that is formed by the glenoid cavity of the scapula and the head of the humerus. It is also called a humeral joint or a shoulder joint.

A gliding joint is a synovial joint where the opposed surfaces are flat or only slightly curved, allowing the bones to slide against one another in a simple but limited way. An example of a gliding joint is an intervertebral joint as well as many of the small bones located in the ankle and wrist. These joints are also called plane joints or arthrodial joints.

A hinge joint is a synovial joint that allows movement in only one plane, forward and backward. Some examples of this type of joint are the interphalangeal joints in the fingers and the elbow joint.

The jaw is also considered to be a hinge joint, although it can move a little from side to side as well. Also called ginglymus joints, these joints can include the ankle and knee joints that allow some rotary movement.

Hip joints are synovial joints that are formed at the head of the femur as well as the acetabulum of the hip.

This is a type of fibrous joint.

The knee joint is the compound joint between the tibia, the patella, and the femur.

The pivot joint is a synovial joint in which one bone pivots within a bony or an osseoligamentous ring. This allows for only rotary movements and an example is the joint located between the first and second cervical vertebrae; i.e., the axis and the atlas. The joint is also called a trochoid or rotary joint.

This is a type of gliding joint.

This is a ball-and-socket joint.

A rotary joint is also called a pivot joint.

The sacroiliac is the joint in the lower back between the sacrum and ilium.

A saddle joint is a synovial joint whose movement resembles that of a rider on horseback; in other words, it is one that is able to shift in several directions at will.

At the base of the thumb, there is a saddle joint, in part because it allows the thumb to be more flexible and complex than the other fingers although it is also more complicated to treat if it becomes injured.

The shoulder joint is a humeral joint.

A simple joint is a type of synovial joint in which only two bones are involved.

The spheroidal joint is a type of ball-and-socket joint.

This is another type of fibrous joint.

The trochoid joint is a pivot joint.

Parts of a Synovial Joint

This cartilage is a connective tissue that is highly specialized and present in all diarthrodial joints. The main purpose of articular cartilage is to provide a smooth and lubricated surface for any articulation and for the facilitation of load transmission with a low frictional coefficient.

Articular cartilage is usually from two to four millimeters thick and consists of a dense material made up mostly of highly specialized cells known as chondrocytes. Divided into zones, articular cartilage is made up of a lot of water, collagen, and numerous other proteins.

A cross-section of articular cartilage can be seen here.

A fibrous joint capsule is a ligamentous sac surrounding the articular cavity of any freely moveable joint. It is attached to the bone and completely exposes the joint. A joint capsule is also composed of an inner synovial membrane and an outer fibrous membrane.

They are also called articular capsules or capsular ligaments. In other words, the joint capsule has two parts and one of them is a fibrous membrane or fibrous joint capsule, that is considered the outer layer.

Fibrous joint capsules are demonstrated in many medical photographs, including this one.

All joints in the human body contain synovial fluid. Also called synovia, the fluid is very thick and lubricates the joint. This, in turn, allows for easier movement.

In certain joint diseases, such as arthritis, the synovium of the joint is where inflammation usually occurs the most. Because of this, synovial fluid is how the causes of joint inflammation are usually diagnosed.

Synovial fluid is non-Newtonian and viscous, is egg white-like inconsistency, and has a major role in reducing friction between the articular cartilage of synovial joints whenever movement is taking place.

For obvious reasons, synovial fluid is a very important part of a person’s life because, without it, you simply could not move with the freedom you have now. More details and photographs of synovial fluid can be found at sites such as this.

A ligament is a fibrous band of connective tissue that is very tough and meant to support all the internal organs as well as hold all of the bones together in proper articulation at the joints. Ligaments are composed of dense fibrous bundles that consist of fibers filled with collagen and spindle-shaped cells that are called fibrocytes.

The latter, although very tough, also allows very elastic movement. At the joints themselves, the ligaments from a capsular sac that encloses articulating bone ends and the synovial membrane, which is a lubricating membrane.

Occasionally, the structure also consists of a recess, also called a pouch, that is lined by a synovial fluid called a bursa. Other ligaments can fasten across or around the bond ends in bands. This permits varying degrees of movement and acts as tie pieces between the bones, which restricts inappropriate movement. When it does this, it usually involves bones such as the ribs or those in the forearm.

Photographs of ligaments can be seen at sites such as this.

A condition called toxic synovitis exists and is caused when inflammation occurs in the hip joint. Unfortunately, the cause of toxic synovitis is unknown but many specialists believe that it is due to some type of viral infection. Toxic synovitis usually affects only one hip, although it is possible for inflammation and swelling to spread to other joints.

A detailed picture of a synovial joint can be found here.

More details on the skeletal system, including chiropractic treatment, can be found here. 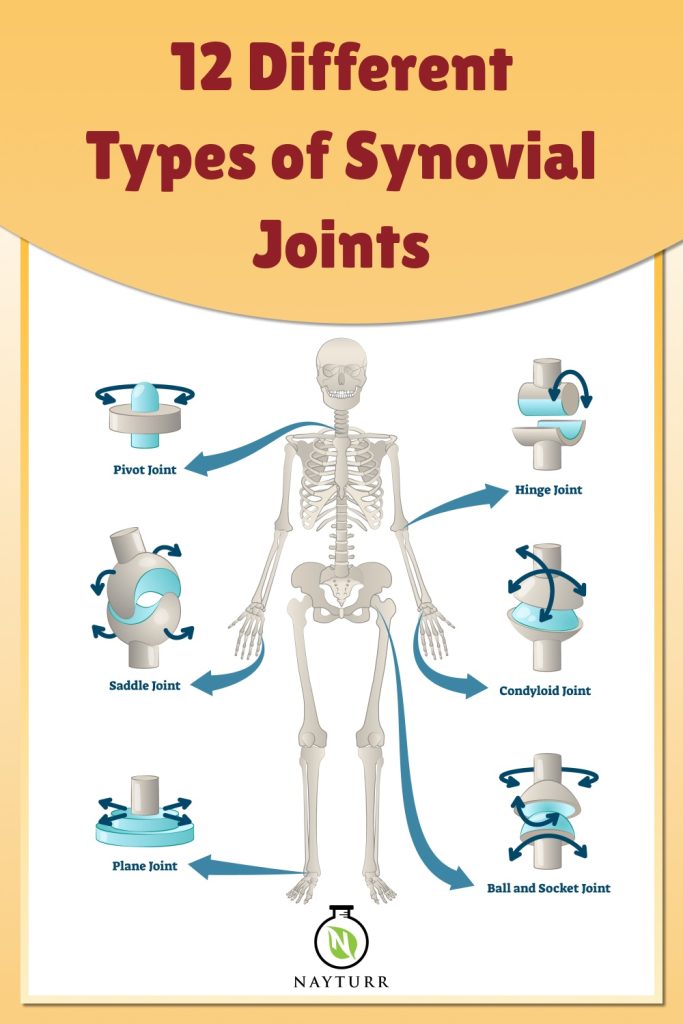