A stream is a body of water with a detectable current that moves across the country between banks. It is also characterized by a particular profile which includes beginning with steep gradients, no floodplain, a little shifting of channels and evolving into streams with low gradients, wide floodplain, and extensive meanders.

Streams go through stages in its lifespan beginning with the initial phase known as a “young” stream and followed by a “mature” or “old stream.”

When a stream leaves an area that is relatively steep and enters one that is almost entirely flat, this is called an alluvial fan. It is shaped like the letter E, and to fully understand what an alluvial fan is, you have to understand how streams work.

These distributaries most often find their way back together and form a single valley, but when they instead fan out over a broad area, the result is an alluvial fan.

Alluvial fans form when a stream leaves a canyon and flows out to a lowland that is essentially flat. The sediment generated by the canyon’s erosion means the stream will have a very large load by the time it arrives on the flatland.

The flatland is a little steeper at the mouth of the canyon, and the Badwater Road Alluvial Fan in Death Valley, California, is a perfect example.

Usually found close to very high mountains, braided streams have multiple channels that continuously branch and join along the entire length of the stream, which in turn creates numerous longitudinal bars between the channels.

Also known as anastomosing, it is not the same thing as alluvial fans because the channels do not form into fan shapes or distributaries.

They are called braided streams because the pattern resembles hair tresses that are braided together. Moreover, they tend to rejoin very quickly and their flow is concentrated on a narrow valley that has no actual floodplain.

There is a Providence Canyon in Georgia that has a small stream on the bottom, and it demonstrates what braided streams look like.

Although the eastern part of the United States has very few braided streams, they can be found frequently in the large rivers that cross the Great Plains from the Rocky Mountains. It is also common for more streams to form whenever the water levels recede.

Deltas result when streams enter a standing body of water, usually an ocean. If the body of water is able to move the sediment as fast as it arrives, deltas will not form. Deltas are like alluvial fans in one aspect because there are distributary channels which spread out from a single channel.

The Nile delta is perhaps one of the most famous deltas on the planet, and before it was used frequently for irrigation, many more active distributaries were present.

In fact, any time a stream reaches a standing body of water, even if it isn’t an ocean, a delta will form. The delta will eventually fill the lake entirely with sediment, even though they have a life expectancy when they are man-made reservoirs.

Deltas usually form the shape of a triangle, which is another reason for their name, and the river usually subdivides into other small rivers before flowing into the sea; an example of this is the Mississippi Delta.

Ephemeral streams flow for a short time only, usually after the snow melts or there is a massive rainstorm; in other words, any time there is an increase in the amount of watershed on the earth. These are small streams with channels that are usually dry during the year.

Contrary to what some people think, there is a difference between ephemeral streams and intermittent streams. Ephemeral streams are very shallow and have a lot less flow than intermittent streams, and they are actually dry throughout most of the year. In recent years, areas that have experienced less-than-normal rainfall can exhibit ephemeral characteristics because they can form these types of streams.

Intermittent streams are those streams that usually flow during the wet season – usually winter through spring – but which are typically dry during the hot summer months. They flow for part or most of the year, but they do not always carry water during the dry season.

Also called seasonal streams, they are supplemented by the runoff from rainfall or other types of precipitation, and they only flow during certain times of the year, usually as a result of groundwater which provides enough water for the flow of the stream to be maintained.

A meandering stream consists of large loops that flow across a wide flat floodplain and is surrounded by valley walls. If the mountains are too close to the sea, you usually don’t find these types of streams. They are always found in relatively flat areas – including floodplains – as well as places where the sediment is made mostly of muds, fine sands, and silts.

Some scientists are unsure whether meandering streams are depositional or erosional because it is obvious that they both erode sediment and deposit it; however, most of them concur that they are mostly erosional, due to their energy versus load ratio.

Meandering streams grow laterally through erosion – outside the bend – and through the deposit of sediment inside of the bend. If the loops get too big and develop friction, meaning they consume too much energy, the stream will find a shortcut that is less taxing, resulting in a part of the old channel being abandoned. In this case, an oxbow lake will form.

Perennial streams have water flowing through them all year long, and the source of the water can be either surface water, groundwater, or both. This doesn’t mean that there is water in every inch of its bed, but at least part of the stream will have some water in it.

These are permanent streams, and they rely on normal amounts of rainfall for their existence. Also, the aquatic bed is located below the water table for most of the year with a perennial stream, and they are very well-defined channels as well.

Sometimes, streams are not perfectly straight, but have no major twists and turn about them, and these are called straight channel streams. These types of streams are confined to a single channel, and their banks and valley walls are essentially the same things.

Straight streams do not have to have gorges or canyons that are thousands of feet deep, but they all have valley walls that go inward steeply right to the edge of the water, meaning there is no actual floodplain.

Straight streams are also purely erosional, and the resulting sediment moves quickly downstream because of the energy of the flowing water. They also usually have very large boulders in their beds.

Check out our article “14 Different Types of Terrain” to learn about the different types of places that streams and rivers can develop. 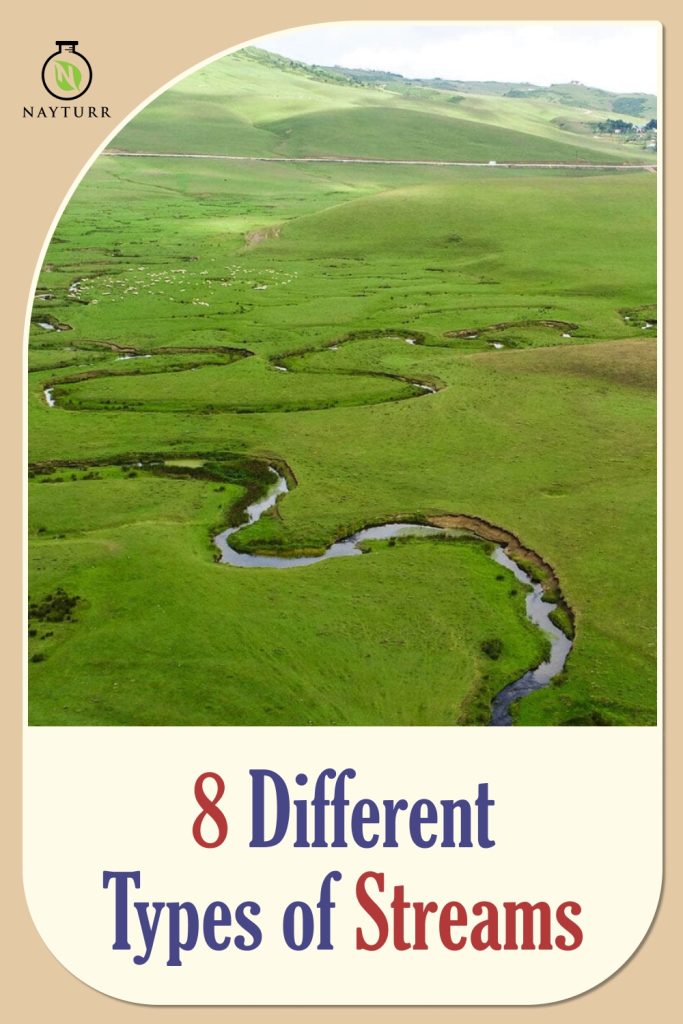