Gnats is a descriptive name for tiny flying insects in the Dipterid suborder Nematocera. They can lay up to 300 eggs in a day and use dead or decayed insects and other small animals as a safe haven for laying eggs and providing them with nourishment.

They can live for about four to five months and consume dried leaves, bad seeds, decaying animals, flies, and insects. Male gnats don’t bite while female gnats do and transfer infections to both wild animals and humans by biting on the skin.

Buffalo gnats have a humpback appearance and are usually no longer than one-eighth of an inch in length. They usually come out in late spring or early summer, and the males of these gnats do not harm humans because they feed on nectar.

Female buffalo gnats will swarm around animals such as birds and even human beings, biting them so they can get their supply of protein. While males feed on nectar, the females feed on blood so they can get enough protein to produce their eggs. Buffalo gnats are especially attracted to perspiration, dark-colored moving objects, and carbon dioxide.

Often causing harm to mushroom farms and household potted plants, this type of fly is actually studied very little. It could be because of its small size, which also contributes to the difficulty of identifying different species.

Experts believe there are around 1,700 species that have been identified, but roughly 20,000 species that haven’t been discovered yet, with most of those being in the tropics. In fact, Europe alone is known to have approximately 600 species of gnats.

You can identify gnats because they are very small – no more than one-third of an inch long. Their bodies are dark and slender, but several of the species have females that are wingless. Their bodies consist of long legs, an antenna, and from eight to 16 segments throughout the body itself.

In temperatures that are warm and damp, these types of flies grow rapidly, and experts are continuously studying ways to get rid of them, in part because they attack mushrooms and plants at the root, destroying them in a very short period of time.

In fact, if you’re growing crops and these gnats get to them, it could be the end of your crops. It is also a good idea to watch out for them when growing herbs.

Also called fruit flies or grass flies, there are over 2,000 species of the eye gnat worldwide. They are extremely small and usually in black or yellow, and their exterior is hairless and somewhat shiny.

One of the reasons they are called the eye gnat is because they are attracted to eyes; in fact, they even feed on various secretions and body fluids of numerous animals, including human beings.

There have been several amber deposits found with eye gnats in them, meaning they’ve been around for a very long time, most likely since the Cretaceous period or even earlier.

A gnat is one of many species of flying insects in over 160 genera. The male gnats usually gather in large mating swarms – sometimes called ghosts – usually at dusk. The larvae for gnat are free-living, and some of them are aquatic animals.

They can feed on either meat or plants, and some species of fungus gnats wreak havoc on mushrooms and the roots of various potted plants found indoors and in greenhouses.

Some orchids in South America get pollinated by tiny gnats, and usually, these are the ones with very small flowers. Most experts agree that only non-biting animals are gnats, and they usually fly in very large crowds, which are called clouds.

Called either gall gnats or gall midges, the larvae of these bugs feed on the plant tissue, which in turn creates abnormal plant growths called galls. Their official name is the Cecidomyiid, and they lay eggs on the grass.

They are very fragile and small insects, and they have long antennae and wings that are hairy. Although there are more than 3,000 species worldwide, roughly 1,100 have been studied from North America.

Furthermore, plenty of experts think these numbers are conservative since it is difficult to know exactly how many species of gnats there are.

The most significant aspect of gall gnats is their ability to cause severe damage to plants and even crops. Included in this species are flower midges, swede midges, and alfalfa sprout midges, among others.

They can wreak havoc on wheat, lentils, fruits, and goldenrod stalks, so this is one pest you’ll want to keep an eye out for if you’re growing these products.

Gnat bugs can also be called a unique-headed bug, and there are around 130 species of this type of gnat. These bugs are found all over the world, and they are usually less than a quarter-inch in length. Their heads are elongated and constricted in certain places, which is why they have the name “unique” attached to them.

No-see-ums are also called biting midges, but in other countries, they can be called sand flies, midgies, and even punkies. They are no more than one-third of an inch in length, and they are kin to the black fly. They also go by their official name, which is the Ceratopogonidae.

Sand gnats can also be called sand flies, and they always bite and suck blood from their host. In the United States, some people call these gnats horse flies or even greenheads.

Other names include the no-see-um, punkie, Chitra, and granny nipper. However, the no-see-um is actually a very different form of bug called a biting midge, so these two flies are not the same thing.

If you’re bitten by a sand gnat, common remedies include Calamine lotion, antihistamine, hydrocortisone cream, tea tree oil, lavender oil, and even the Ibuprofen gel. You can try home remedies as well by using products such as toothpaste, aloe vera, and onions.

Not only do they lay eggs, but they can also each lay up to 300 eggs in a single day.

Only the Females Are Dangerous

While male gnats do not bite, the female gnats do, and their bites can cause a lot of itchiness, pain, and swelling. In fact, it is recommended that you immediately tend to a bite from a gnat, because there is always the possibility of it getting infected if you leave it alone for too long.

In addition, some gnats can even transmit viral diseases when they bite people, so it is always best to have the bite tended to quickly.

They Are Not Color-Blind

Gnats love bright, dark colors, so if you’re wearing something with one of these colors, the gnats just might be attracted to you! In fact, the female gnats are particularly attracted to the color black.

When It’s Cold Outside …

Gnats are most often found inside your home when it’s cold outside, but they can essentially be found in other seasons as well.

They Do Not Live Very Long

The average gnat lives only about four to five months, so gnats have very short lifespans.

To learn some interesting facts about earthworms, check out our article “9 Different Types of Earthworms” 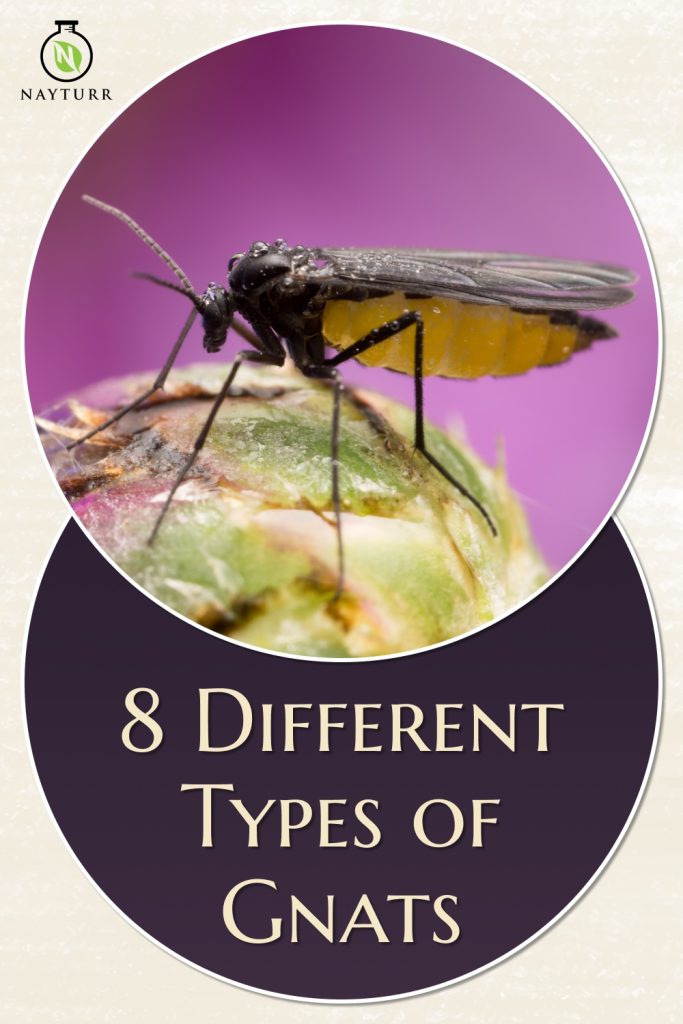