I know as well as anyone else how exciting it is to learn that your French bulldog will be having puppies soon. When I saw the signs that my dog may be pregnant, I did hours of research to confirm my suspicions and make sure we could give her the care she needed. It’s really not easy to tell if a French bulldog is pregnant, though there are some signs that you can notice early on in the pregnancy.

Read on to learn more about these signs, what you should expect during the pregnancy, and how you can care for your dog as well as possible until she gives birth.

How to Tell if Your French Bulldog is Pregnant

Here are the seven most tell-tale signs that your French bulldog is pregnant:

If you’re noticing that your French bulldog has a sudden decrease in energy and spends more time napping than usual, it could be an early sign that she is pregnant. Similar to humans, dogs also experience hormonal changes during pregnancy that make them easily exhausted.

This will be one of the first indicators that your French bulldog is pregnant, and begins a few weeks after the beginning of her pregnancy. This should subside after a few weeks, once your dog is accustomed to her pregnancy.

This will be obvious if your dog is normally energetic, but it might be difficult to notice if your French bulldog normally sleeps a lot. Regardless, just pay close attention to your dog and monitor how fast she gets tired.

A changing appetite is also a potential sign. Depending on what stage of the pregnancy she’s in, your French bulldog may go through numerous increases and decreases in her appetite.

This decrease in her appetite is not something to be worried about; she will make it up for it during the later stages of her pregnancy. It’s common for dogs to have an increase in appetite and be dissatisfied with their regular portions of food during the late stages of pregnancy. Once this happens, increase the amount of food you give her just a little bit.

NOTE: If your French bulldog refuses to eat for three days straight, she needs to see the vet.

Aside from appetite changes, unusual behavior is also an indicator of pregnancy. Behavioral changes vary from one dog to another.

If your French bulldog is pregnant, she may spend more time at your side and become more affectionate. If this happens, she is likely seeking extra comfort as she is confused about the changes her body is experiencing.

It’s also possible for your French bulldog to become more aggressive or grumpy during pregnancy. You may notice that she would rather spend time alone and will be irritable when you give her attention. If this happens, she is likely exhausted and wishes not to be bothered so she can properly rest.

NOTE: Carefully monitor your dog for behavioral changes so you can give her the extra attention or isolation that she needs to cope with her pregnancy.

Changes in your French bulldog’s nipples can also indicate that she is pregnant. This may be difficult to notice at first, as most people do not regularly inspect their dogs’ nipples. However, by inspecting your dog closely, you will be able to notice these changes.

NOTE: Her nipples will eventually leak milk, especially during the later part of the pregnancy.

Aside from their size, the color of her nipples will also undergo noticeable changes. They will become more red or rosy, particularly the four to six nipples near her hind legs. These changes in color indicate an increase in blood flow, which happens at the same time that her nipples grow in size.

One of the most telling signs that your French bulldog is pregnant is weight gain, which is more noticeable during the later stages of pregnancy. If you notice a sudden increase in your dog’s weight and can’t think of any other reason for it, pregnancy may be the cause.

This happens because the puppies inside her will grow and her abdomen will enlarge. Since French bulldogs are a small breed, her weight gain won’t be as significant as that of bigger dogs, but it will still be noticeable.

NOTE: When you start to notice weight gain in your French bulldog, carefully check for other symptoms as well. Weight gain is not one of the first signs of dog pregnancy, so you should be able to see other signs by this point.

If there are no other symptoms, it could mean that your dog has an underlying health issue. Either way, it’s best to bring your French bulldog to the vet to ensure you’re giving her the care she needs.

As your French bulldog nears her due date, she will begin to nest. You may notice that she begins shredding bedding and other material to create her own “nest”.

This can begin at various points of the pregnancy. While it’s common for dogs to display this behavior right before they go into labor, there are instances when they nest earlier.

In fact, their nesting behavior can happen on and off for several weeks. However, nesting behavior is a telltale sign that she is getting ready for the birth of her puppies, whether she’s early or not.

NOTE: During this time, your French bulldog will be irritated very easily. It’s best to limit your contact with her at this time. You should advise others to do the same, especially if you have kids.

Similar to humans, your French bulldog may experience morning sickness during the early stages of pregnancy. This only happens for a few days during the first few weeks of pregnancy, so you can easily miss it if you don’t pay it much attention.

The effects of morning sickness may vary, making it difficult to identify whether your pet is experiencing it. Some French bulldogs vomit during the morning while others simply eat less.

NOTE: Since this only lasts for a few days, there is nothing to worry about unless she refuses to eat for multiple days.

What to Do if Your French Bulldog Is Pregnant

Once you’ve determined that your French bulldog is pregnant, you will need to give her the best possible care. This is important to ensure that she has a safe and healthy pregnancy.

The most important thing you can do is to bring your French bulldog to the vet. They will be the best person to determine whether your dog is pregnant. They will also give you recommendations for supporting your dog during pregnancy.

Make sure that you stick to the vet’s recommendations so she will receive the nutrition and care she needs. This will also protect her from any stress that could put her pregnancy at risk.

What to Expect During Your French Bulldog’s Pregnancy

Here are some things you should know and expect during your French bulldog’s pregnancy:

NOTE: To determine whether she is going into labor, you can take her temperature regularly. It will drop moments before she goes into labor.

Give Your French Bulldog the Best Care During Pregnancy

While knowing that your French bulldog is having puppies is exciting news, it’s important to protect the safety of her pregnancy.

Carefully examine your dog for signs of pregnancy and bring her to a vet if you think that she is. This is the best way to ensure that she receives proper care and avoids any complications in her pregnancy that could put the health of her or her puppies at risk. 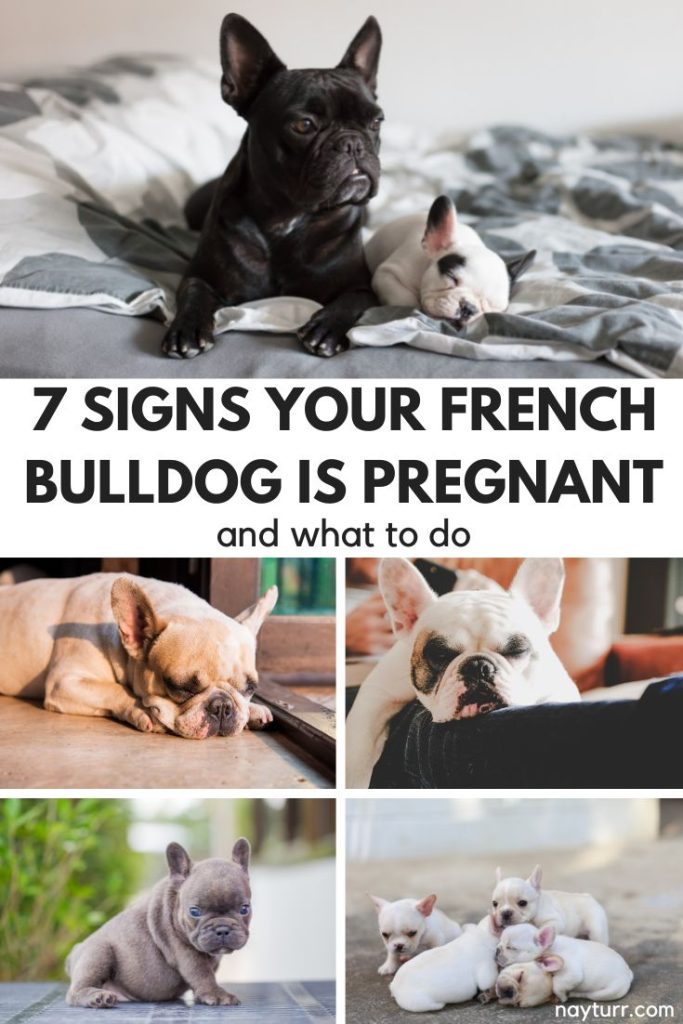