Ragdoll cats are wonderfully cuddly companions, especially with their tendency to go limp or “ragdoll” when you pick them up. My youngest cat is a three-year-old ragdoll who I’ve raised from a kitten, and I loved every minute of watching her grow up. If you’re curious about the process of a ragdoll kitten becoming a cat or are thinking of adopting one yourself, here are a few things to take note of.

Ragdolls grow slower than other cat breeds, reaching full maturity at three to four years old. When they’re fully grown, you can expect them to weigh around 10 to 20 pounds, stand around 9 to 11 inches tall, have a bi-colored coat with a distinct ragdoll pattern, and behave with a gentle, non-aggressive temperament.

Now, how long is it before a kitten becomes a cat? Ragdolls are one of the larger domestic cat breeds, and their growth reflects it. Unlike other smaller cat breeds that are nearly or fully grown at one year old, ragdolls stay kittens for around three to four years.

FACT: During a ragdoll cat’s growing years, they grow in spurts instead of a slow, gradual progression.

However, even if they don’t reach full maturity by one-year-old, they still see a lot of growth in their first year. If you’re adopting a kitten, you’ll likely receive them at around 12 weeks old, after they’ve been properly weaned and socialized.

Their most rapid period of growth is just before six months old, and they’ll begin to experience growth spurts at five months old. During this time, it’s important to feed them high-quality kitten food (like this grain-free kitten food from Amazon) to supplement their speedy growth. They generally gain around one pound each month until they hit 12 months old.

On average, a ragdoll can live for around 12 to 15 years. They’re generally a healthy breed, but they can be prone to obesity due to their laid-back personality and large stature. Be sure to give your kitty plenty of food and exercise (try something like this toy from Amazon for exercise) to ensure they grow up well.

Tell-tale Signs Your Ragdoll Kitten Has Become a Cat

Crowned as the most popular cat breed in the world in 2021, ragdolls are known for their mellow, affectionate, and patient nature. Not only are they fluffy and cuddly, but they also love playing and can easily get along with children. When you shower them with care and attention, they’ll reward you with lifelong loyalty.

Caring for a ragdoll can be incredibly rewarding, so it’s no surprise that many look forward to having a ragdoll as a pet. If you’re thinking of getting a kitten, keep a close eye on their journey and watch for these signs your ragdoll kitten has become a cat.

#1. Their Size and Weight

When they’re still kittens, ragdolls are as tiny as any other breed. They also have healthy padding of soft fat. Their ears and paws will look “too big” for them.

As they mature into adults, they’ll grow into their large bone structure and develop strong muscles, especially if you ensure they get proper exercise while growing up. A fully-grown ragdoll is one of the biggest domestic cat breeds, so it’s one of the most obvious characteristics when checking if your kitten has become a cat.

At the end of their first year, they’ll have grown nearly to full size, but they’ll continue growing until around four years old. When you notice that your ragdoll hasn’t grown larger in a while, it’s safe to say that they’re adult.

You can expect an adult ragdoll to weigh around 10 to 20 pounds. On average, males are heavier than females, averaging 12 to 21 pounds in comparison to females’ 8 to 15 pounds. They stand at around 9 to 11 inches tall and are 17 to 21 inches in length, excluding the tail.

#2. The Color of Their Coat

At birth, ragdolls’ coats are completely white. However, as they grow up, you’ll observe changes in their coat’s color.

Ragdoll kittens are generally lighter in color, developing darker patches of fur in response to their metabolism and the environment as they age. This is due to a unique genetic mutation that makes its coloration dependent on its body temperature.

Areas with higher body temperatures will have lighter-colored fur:

Areas with lower body temperatures will have darker-colored fur:

FUN FACT: As your ragdoll kitten grows up, its metabolism slows and lowers its body temperature in certain areas.

You may observe changes in your ragdoll kitten’s colors over short periods of time, but when it becomes an adult cat, its metabolism will stabilize and allow it to maintain a steady-colored coat with a distinct ragdoll pattern.

As ragdolls are known for their gentle temperament, you might be surprised when your ragdoll kitten insists on bouncing off the walls and spending all of its energy playing. That’s completely normal — and also one of the main ways to tell when your kitten becomes an adult cat.

Kittens tend to be more excitable and active. When they mature, they’ll exhibit more of the typical ragdoll characteristics:

As adults, ragdoll cats will be content with just cozying up next to you on the sofa instead of chasing after toys.

Ragdolls see a few differences between kittenhood and adulthood, namely their large size, coat color, and personality. When you’re watching your ragdoll kitten grow up, take as many pictures and videos as you can — you’ll marvel at their growth from a small, frisky kitten to a gentle, cuddly giant. 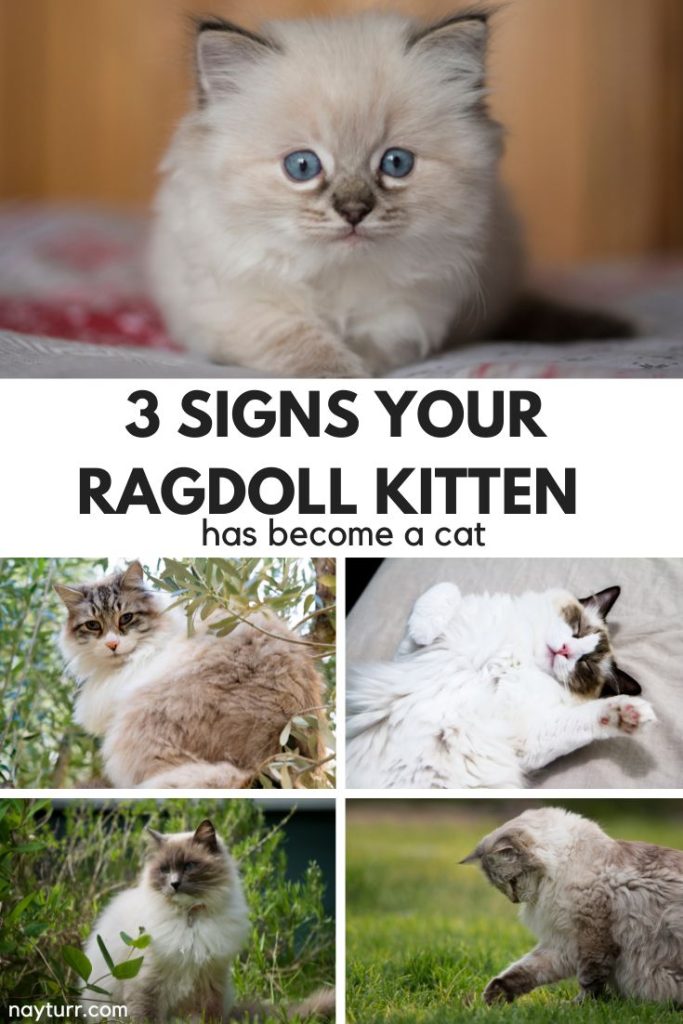