Have you ever seen an eagle in real life? Their status as “the king of the bird kingdom” is well-deserved, with their imposing size, powerful senses, and incredible strength. I love learning about various animals and their unique traits, so I put together this guide on the types of eagles for similar curious souls.

There are over 60 species of eagles across the world, mainly found in Eurasia and Africa. The largest eagle is the Philippine eagle, which stands around three feet tall with a wingspan of six to seven feet. The strongest eagle is the Harpy eagle, which can apply 530 pounds of pressure with its four-inch talons.

If you want to learn more about the various types of eagles, such as which ones are the most common and which ones have become extinct, keep reading!

Eagles belong to the family Accipitridae, which also includes hawks, kites, and vultures. Eagles are typically larger than other birds of prey, have hooked beaks, and possess a keen sense of sight.

There are around 60 species of eagles around the world, with the majority being found in Eurasia and Africa. Outside of these areas, there are:

The most common or widely-distributed species is the Golden eagle, which can be found in:

Eagles can vary significantly in size. The smallest species in the world, the Great Nicobar serpent eagle, is only 1.32 feet (or 40 cm) tall and weighs 1 pound.

Sight is an eagle’s strongest sense — their vision is up to eight times better than that of humans. Their eyes are roughly the same size and weight as ours yet possess millions more cones (color-sensitive light-detecting cells) than ours. They can spot prey as far out as two miles away.

As a result, they see five basic colors (humans see three) and can detect UV light. Even if they can’t move their eyes much, the way they’re angled on their face gives them an impressive field of vision. In addition to their sight, many species also have an outstanding sense of hearing, although they have a poor sense of smell like most birds.

Here are a few more fun facts about eagles:

Eagles are informally grouped into three types of eagles, based on similar characteristics.

Sea eagles, as the name suggests, thrive near the water. Their diet is mostly fish and they tend to live near bodies of water, but some can be found further inland. The members of this group can be found on every continent except Antarctica and South America.

The Bald eagle is one of the most well-known eagle species, with its status as the United States national bird. They hail from North America and average around 28 to 38 inches tall with a wingspan of 80 inches, and weigh 6 to 14 pounds.

They have a distinctive white head contrasted by a dark brown body, which is where the name comes from — the Old English word “Balde” means “white.”

FACT: In the 1970s, bald eagles were on the brink of extinction, with only 487 nesting pairs left in the U.S. After decades of conservation efforts, there are now roughly 300,000 individual bald eagles within the county and they’re no longer considered endangered.

Steller’s sea eagle, mainly found on east Asian coasts, is the world’s largest eagle in terms of weight. They can weigh up to 20 pounds and have an average wingspan of 7 feet.

Their bodies are mainly dark-colored with splashes of white on their:

FACT: Steller’s sea eagles are currently considered a vulnerable species on the International Union for Conservation of Nature (IUCN)’s Red List of Threatened Species, as their population has been on a downward trend.

The African Fish-eagle is commonly found across sub-Saharan Africa, where there are plenty of water bodies.

Along with a dark brown body and black wings, an African Fish-eagle can be recognized by its pure white:

On average, they weigh around 4 to 8 pounds and have a wingspan of 6.6 to 7.9 feet. The population of African Fish-eagles appears to be on a consistent rise, so they’re currently a species of Least Concern on the Red List.

The Madagascar Fish-eagle is the largest bird of prey found in Madagascar. They’re around 2 to 2.17 feet tall, with a wingspan of 5.42 to 6 feet, weighing around 4.8 to 7.7 pounds.

It has a dark body with a pale head and tail — the latter of which is one of its unique traits, as it has a short tail compared to its large body.

Madagascar Fish-eagles is one of the few eagle species that is marked as Critically Endangered on the Red List. Because it mainly feeds on fish, it became persecuted by fishermen. They also face a loss of habitat due to the:

Currently, there are only around 250 nesting pairs.

Snake eagles specialize in hunting snakes and other small reptiles, hence the name. They’re medium-sized birds of prey mainly found in the tropical parts of Africa and Asia.

The Great Nicobar serpent-eagle’s claim to fame is that it’s the smallest species of eagle in the world. They have a body length of around 1.32 feet (or 40 cm) and weigh 1 pound. Their wingspan is around 2.7 to 3.1 feet.

A Great Nicobar serpent-eagle has a pale brown body devoid of any markings or spots on its belly, which differentiates it from the Crested serpent-eagle. It has a black crest on its head and dark brown wings.

They can only be found in the forests on the Great Nicobar Island in India. Their status on the Red List is Near Threatened, as the loss of their habitat threatens the population.

Crested serpent eagles can be found mainly in:

As adults, they’re mainly dark brown with white specks across their breasts and belly. When in flight, the underside of their brown wings is marked by a distinctive single pale band across their wings and tail.

They’re marked as a species of Least Concern, but some scientists believe that it has at least 21 different subspecies, some of which may be endangered.

This group is a collection of species that don’t fit in with the other types of eagles. There is a subgroup called “true eagles”, which have feathers on their lower leg ending at their feet. They are:

Harpy eagles are the strongest eagles in the world, capable of exerting 530 pounds of pressure with their grip. On average, they weigh 18.2 pounds and are around 2’10” tall, with a wingspan of 6’5“.

They’re mostly gray in color and their most striking physical feature is the crown of feathers on their heads that fan into an upright crest when threatened.

Harpy eagles are often found dwelling in the upper canopy of South American rainforests. Currently, their status is Near Threatened.

The Philippine eagle is the national bird of the Philippines and can be found in rainforests near the mountainsides of the country.

It’s the largest eagle in the world in terms of size, with females of the species averaging 3’5″ tall. Their average wingspan is over 7 feet and their weight ranges from 8 to 18 pounds.

The Philippine eagle has a dark face and a white-and-brown crown and nape, its back and outer feathers are dark brown, and its belly and underwings are white.

Due to deforestation, their status on the Red List is Critically Endangered — there are currently less than 400 nesting pairs of Philippine eagles in the wild.

The Golden eagle is the most common eagle in the world and the national bird of Mexico. It’s widely distributed among a variety of places within:

FUN FACT: Golden eagles are the largest bird of prey in North America and can dive up to speeds of more than 150 miles per hour!

They’re mainly dark brown in color, with a distinctive golden-brown sheen on the back of their heads and necks. On average, they weigh around 6 to 15 pounds. They stand at around 2.75 to 3.17 feet tall, with a wingspan of 6 to 7.5 feet.

With how stable and widespread their population is, they are currently a species of Least Concern.

The Martial eagle is among the most powerful in the world, sporting extremely long and powerful talons — they’re fully capable of breaking a fully-grown man’s arm or knocking them down. They’re also fully capable of taking down:

Martial eagles are the largest eagle in Africa and weigh an average of 10 pounds, stand at an average of 2.83 feet tall, and have an average wingspan of 6’9″. They have a mostly dark gray body, with a lighter belly dotted with black spots.

Whether it’s the iconic Bald eagle, the tall Philippine eagle, the strong Harpy eagle, the common Golden eagle, or the extinct Haast’s eagle, the world of these birds of prey is an interesting one.

10 Types of Eagles: Complete Guide with Pictures offers a quick peek into their world to sate the curiosity of inquiring minds. Hopefully, you walk away from this article with a deeper knowledge of eagles! 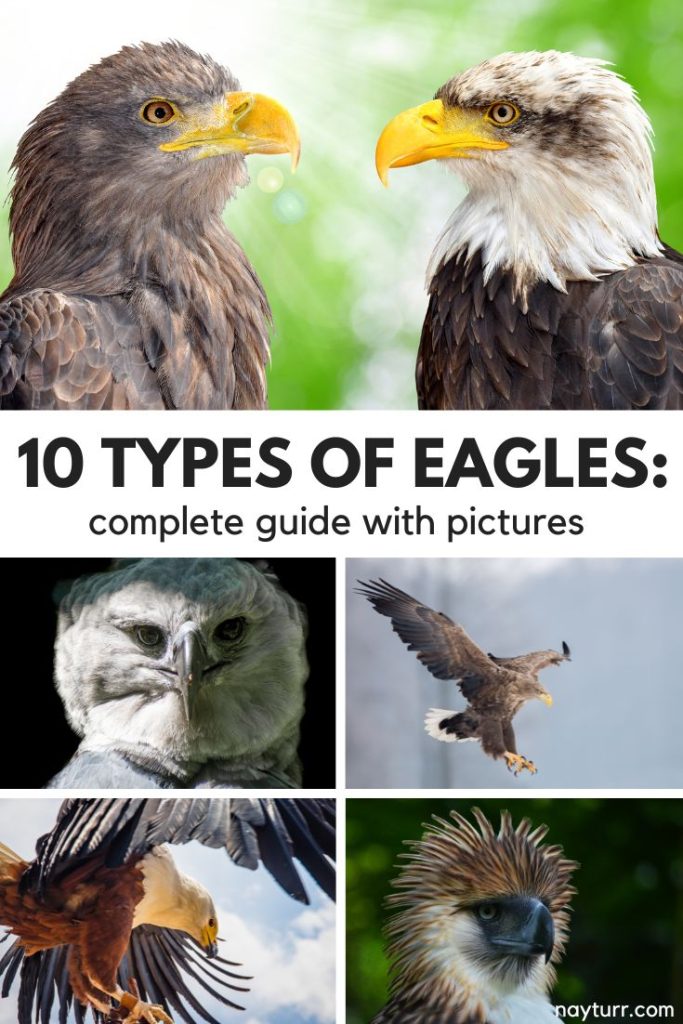